This vegan gravy recipe requires a bit of work, however, the effort is worth it. A lot of gravies don't have much flavour. To make this gravy more flavourful, I have focused my attention to the stock and thickening agent.

Traditionally vegetable stocks are made by boiling the vegetables and passing them through a colander, and then using that liquid to make a gravy. Often, cornflour is used to thicken a gravy. These methods can tend them towards bland and boring.

With my vegan gravy recipe, on the other hand, I make the stock how a chef would make a meat stock. In a meat stock the bones and the vegetables are roasted before adding water, and that is what I do in this recipe. I add mushrooms and tomatoes so that the gravy has a nice caramel and intense flavour. The stock is simmered for half an hour to get all the flavours from the vegetables, and then passed through a sieve. This liquid is simmered once again to give a more intense flavour.

The thickening agent is a brown roux (pronounced roo) which is made by cooking vegan butter and flour together until it becomes a light brown colour. The stock is then slowly added to the roux. There are 4 types of Roux: White, blonde, brown and dark, depending on how long the flour and butter is cooked.

Gather together your vegetables, wash and pat dry with a tea towel. Next, roughly chop the vegetables

Then add the water. Put a lid on the pot and bring to a boil. Once boiling, remove the lid and simmer for 30 minutes. Remove from the heat and pour the contents of the pot into a colander with a bowl underneath, to separate the liquid from the vegetables. Give the vegetables a good squeeze with the back of a ladle or spoon (or similar) so as to extract as much juice as possible.

Return the liquid stock back to the heat and bring to a boil again. Reduce the heat and simmer for a further 30 minutes, removing any scum ( foamy bits ) that forms on top with a ladle.

While the stock is simmering away, you can make the roux. Melt the butter in a pan, add the cloves, and then add the flour, stirring continually, until the mix becomes a light brown colour.

After the stock has finished simmering, slowly add it to the roux, bit by bit, stirring continuously to combine. Once all the stock has combined, simmer the gravy for 5 minutes, continuing to stir. Have a little taste and season appropriately.

The vegetables used in this vegan gravy recipe are my preference. You can replace with other vegetables or trimmings you may have hanging about. Usually root vegetables are used to make a stock, however at home, we can add all the vegetable scraps hanging about. I do recommend using celery and leek as they give more flavour. I love using the mushrooms and tomatoes in this recipe. The mushrooms give it the umami taste and the tomatoes give colour and flavour. If you don't have fresh tomatoes, you can use either canned tomatoes or half the amount of tomato paste or puree.

If your gravy is lumpy don't worry, just pass through a fine sieve. The gravy, once cooled, will become thick, but once you heat it up again it will thin down. If it is too thick for you, you can either add some stock or even water to thin it down.

Need something to pour your vegan gravy over? Why not give my vegan wellington a go.

The gravy can be made up to three days in advance and stored in an airtight container in the refrigerator. You can also freeze the gravy. Just defrost in the refrigerator the night before using and bring to a boil before serving. Again, it may end up being too thick. Add some stock or water too thin it down. These actions will not impact the flavour in a big way.

How To Make Vegan Gravy Video 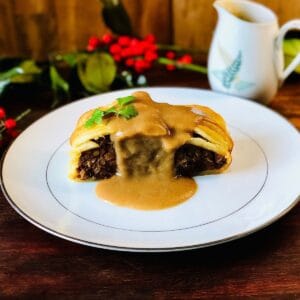 Keyword christmas dinner, homemade, vegan, zerowaste cooking
Tried this recipe?Let us know how it was!

If you love my recipes as much as I love sharing them, please consider supporting me

Perfect for hot summer days. A plateful of colour and taste.