I have many wonderful friends who often give me homegrown ingredients to create a dish with. This year, they have given lots of apples and pears. I love a challenge, it's my thing. So with the pears, my mind went to turning a french classic confectionary, pear tarte bourdaloue into a vegan and gluten free delight. However, baking is a science and can sometimes be unforgiving. Each ingredient plays a crucial role in the final product. Then there are things like temperature, moisture and humidity to think about. Baking is not my area of expertise so this was indeed a bit of a challenge. On the back of the success of my New York style baked vegan cheese cake I was ready for the challenge with this classic pear tart though.

Tarte Bourdaloue is a classic french pear tart from Paris. Indeed, you would find it almost everywhere in the French capital. It has its origins in a pastry shop located on Rue Bourdaloue in Paris, where it was created by a Parisian pastry chef in the 19th century.

Tarte bourdaloue consists of pears and frangipane or almond cream. The tart base is usually sweet pastry. However, in order to make my base gluten free I have used gluten-free oat flour.

The poached pears cooked to perfection makes this pear tart over the top delicious and luxurious. To begin with, the pears should be just ripe, not under ripe or over ripe. To enhance the flavour of the pears after poaching, leave them in the syrup overnight. Then we make our tart.

Getting the poaching just right is important because we cook them again when baking the pear tart. Under poached pears means they will remain hard in the tart, and over poached pears will become mushy while baking.

Here is a video guide to making your vegan and gluten free tarte bourdaloue. 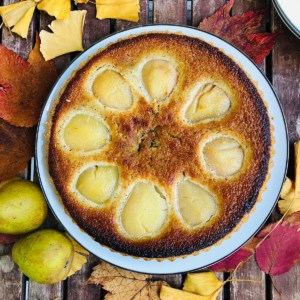 The recipe requires you to cover the pears with a cartouche while poaching. A cartouche is grease-proof paper placed over the pears in the pot to keep them submerged and allow for evaporation whilst poaching.

For the vegan oat flour base, please see the recipe card for my plum tart. You can make the pear tart base a day in advance and store in the fridge. The cooked tart stores at room temperature for up to three days.

If you don't have access to vanilla pods you can use vanilla essence.

If not making this pear tart vegan, you can replace the flax egg with one whole egg. With regard to the tart base, you can use store bought sweet pastry. The texture of the tart will change and you may need to cook for a bit longer.

If you don't have a melon baller or a scooper, use a small tea spoon to remove the core of the pears.

Why not try this delicious pear tart with a scoop of my spiced vegan ice-cream?

Do you fancy a savoury tart? Then try my vegan tomato and rose harissa tart.