Wondering what Pachadi is? It is a kind of south Indian pickle, and in some instances is also referred to as a chutney

Usually it is made with yoghurt, coconut and tempered mustard seeds, curry leaves and red chillies.

In this post, I present to you a cucumber pachadi that is the result of a suggestion on how to use up some loverly organic cucumber given to me by a friend from her vegetable patch.

Pachadi, A Dish From South India

This cucumber pachadi, is refreshing and light, perfect as a side dish. Saying that, you can eat this pachadi as a main dish with rice also. I guess you could say it is south India's answer to the north Indian raita. It is really easy to make, so let's cook it! 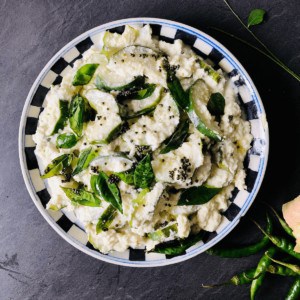 Fresh curry leaves are an essential part of this recipe. In case you do not have access to fresh leaves, you can use dried ones. Note though, that the texture and flavour will change. So why not get yourself a curry plant? My plant came from The Citrus Centre and it is thriving on my sunny window sill.

You can use dairy yoghurt as a substitute for dairy-free yoghurt in this recipe.

Also, fresh coconut can be used. Skip the soaking process.