Umeshu is a Japanese plum wine made by steeping Ume plums in a base spirit with Sugar. It produces a sweet liqueur-like drink. My first introduction to it was about a decade ago while working for Zuma, a Japanese restaurant in London. I was celebrating my mother's birthday when the sake sommelier (wine waiter) suggested I try it with some ice. That was the beginning of the love affair.

With each trip I subsequently made to Japan, I made sure a bottle or two made it into my suitcase. During my last trip to Japan, just before the pandemic, a friend of mine shared how she made her own Umeshu. Until that point, it hadn't occurred to me that this was something you could make at home. Excited to try, I had to find an alternative to the ume plum here in the UK.

I started wild food foraging in 2019, and that year, we had a bumper harvest of damsons at my workplace. As a stoned fruit, similar to a plum, this seemed a good candidate for my experimentation. So I gave it a go. Upon tasting it a year later, I was pleasantly surprised to discover how much it reminded me of Umeshu. My success with damson wine gave me the confidence to experiment further. My mind went to my mother-in-law's garden and her greengage tree. Plums, gages and damsons are the same types of stoned fruits but with different tastes. This ready supply of greengages was too good an opportunity to pass up for my next batch of umeshu plum wine.

The experiments were very successful, and the process was easy. So I wanted to share with you how to make plum wine. It is as simple as placing unripe greengages (or damsons, or plums) in the alcohol and rock sugar in the bottle and leaving it alone to do its thing.

All you need is time and patience. For the best flavour, you will have to leave the Umeshu to mature for a year. Good things come to those who wait.

Traditional Japanese Umeshu uses Sochu, a potato spirit, as the alcohol base. I didn't have access to that in the middle of the pandemic, so I used vodka from the supermarket. Ideally, vodka that is 40% proof is the best. In this recipe, I use vodka 37.5% proof that, made with grains. You can use any flavourless vodka.

On another note, did you know that you can also cure and pickle unripe plums and use them as an olive substitute? Please have a look at my method for curing and pickling green plums.

To begin, sterilise the jar and lid you intended to use for the infusion. Please do this by washing it in warm soapy water, rinsing, and then placing it in the oven for thirty minutes at 100ºC. Place the lid in the oven for the last five minutes only.

Wash and pat dry the greengages. Remove the stems. Discard any that are split or discoloured.

Pour in the vodka, completely submerging the greengages. Leave space at the top to allow the volume of liquid to increase - the plums will release their juices!

Close the lid on the jar and store it in a cool, dark place for four months.

Every once in a while, give the jar a shake.

After four months, your greengage plum wine will be ready to decant.

Remove the greengages with a sterilised spoon and strain the liquid.

I like to leave it even longer, for another six months, because the plum wine mellows with time, giving a better taste. That's a total of one year, but the wait is worth it.

If you enjoy making your alcoholic drinks, then try my sloe gin recipe. 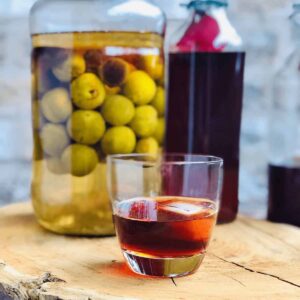 Here is a video guide to making your Homemade plum wine

You can use plums or damsons.

Decant into sterilised bottles. I used the bottles that initially contained the vodka. To sterilise, wash in warm soapy water, rinse, and then place in the oven at 100ºC for thirty minutes.

Regardless of the fruit you use, an essential requirement is to use fruit that is firm on touch, just before ripening.

You cannot replace rock sugar with any other sugar because the rock sugar dissolves slowly and flavours the alcohol evenly over time.

When the plum wine is ready, don't throw the fruit away. Use it in other recipes. I used mine in a Christmas cake. I also made loaf cakes. Once you remove them from the alcohol, their colour will change to a darker brown. Rest assured, though, that they are still very much edible and, in fact, quite delicious, if not very boozy!

If you love my recipes as much as I love sharing them, please consider supporting me

Perfect for hot summer days. A plateful of colour and taste.