One of my childhood favourite recipes is Keema mattar. Keema is a mince, and usually refers to minced goat meat. Mattar is peas. Growing up in my ancestral home in India, it was quite rare for us to eat meat. So we mostly ate a vegetarian diet. This recipe provides a vegan mince version of keema mattar.

My mother developed this recipe of cauliflower keema mattar way before grated cauliflower became popular. She always found cunning ways to get me to eat veggies as I was a very fussy eater. She won me over with this cauliflower mince.

Another popular vegan mince is soya mince. However, I find it a bit spongy and do not really enjoy the texture. This cauliflower keema's taste and texture is much more interesting, I think.

This dish has become a Diwali tradition for my family here in London. It is easy to prepare and you can make it days in advance and store in the fridge. Then you can relax on Diwali day knowing that you have nailed the main course.

Keema mattar tastes best when it is slow cooked. So whether it is minced meat or cauliflower vegan mince, it is best to cook it on low heat over a longer period of time to let the spices and flavours develop. Indeed, it is even tastier eaten the following day after it has matured a little. I know I always recommend eating food cooked fresh daily, but lets say this is one of the rare exceptions.

Many spices are used in this recipe, some whole and some powdered. Each spice, adds another layer of flavour. I promise when you try this, it will be difficult to know whether it is meat or not. So any meat eaters out there, don't be afraid to give it a go! The Cauliflower makes a very convincing vegan mince.

Enjoyed keema mattar with a simple boiled rice. However, I recommend trying it with Laccha Parantha. 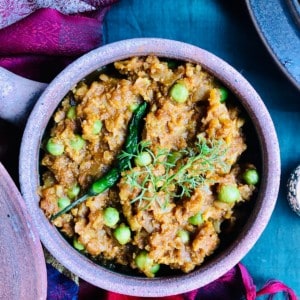 If you do not have mace, you can leave it out, it will to alter the flavour to be noticeable. The same with cassia bark and tej patta, replace with cinnamon and bay leaf.

Yes you can use canned tomatoes instead of fresh, just use the plum tomatoes and puree it.

If you have a food processor you can grate cauliflower in that and save time.