Summer is here, so salad season is upon us. Why not give this little plate of sunshine a go? It is my version of a Panzanella salad, made from fresh tomatoes and toasted stale bread. Panzanella salad is from the Tuscany region of Italy.

Tomatoes are in season at the moment and I'm a great believer in eating seasonal. This is because seasonal produce is naturally at its best. Full of flavour and goodness, as nature intended.

This is my homage to Isle of Wight heritage tomatoes. That is why I haven't added any other ingredients. I wanted to let their taste and colour shine!

I sourced these tomatoes from my local farmers market. The producers from the Isle of Wight grow their tomatoes sustainably with real consideration for the environment. For me, knowing where my ingredients are coming from is of prime importance. After all, food nourishes our body and mind. Although this may not be possible all the time, I am taking baby steps towards a more sustainable and holistic way-of-life.

The traditional Tuscan Panzanella salad may have cucumber, olives, peppers, mozzarella, and even anchovies added for flavour. Why complicate things though. Sometimes keeping it simple is best.

Give this a go, I am certain you will fall in love, its not only a feast for the eyes, the flavours from the tomatoes are like an explosion in your mouth.

You may also like to try my pan con tomate recipe, an heirloom tomato version of the famous Catalonian snack.

Here is a video guide for the Panzanella salad. 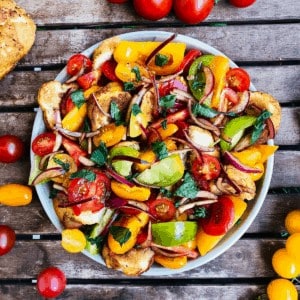 Toasting the stale bread is important for many reasons. Number one for me, as a chef, is to insure that there is no mould hanging about on it. The second is texture. The Panzanella salad will have a lot of juice from the tomatoes, you wouldn't want the bread to go too soggy!

You can use any bread. Here, I used a baguette.

Of course, feel free to use any type of tomatoes if Heirloom ones are difficult for you to find. I'm sure we will be using the tomatoes growing on our balcony to re-visit this recipe when they are ready.

Store in an airtight container minus the bread for a day in the refrigerator, in fact it tastes even better after the tomatoes have had a longer time soaked in the dressing and their juices. Add the bread when ready to eat.